For the past twenty years, through times of hardship and prosperity, Westfield Bank's top priority has been creating financial roadmaps and investing in business by sharing knowledge and building trust. Providing you with true expertise and dedication to help you grow every step of the way.

To provide a vision for the path forward in 2021, we interviewed Jon Park, founder, chairman, and CEO of Westfield Bank, and Brian Toma CFP®, AIF®, at Freeman Heyne Toma Financial Advisors, on our second episode of the Sharing Knowledge Series.

Together, they analyzed the current market conditions in order to present an economic forecast for the year ahead. Our discussion touched on a range of topics, including the new administration, tax implications, economic recovery, and more.

The interview below includes excerpts of conversation from the second episode of our Sharing Knowledge Series and has been edited for length and clarity. To watch or listen to the full episode, click here

How will the election affect businesses in the global economy?

Jon: As we think about the US economy, which is the largest economy in the world, we have some damaged relationships with our international trading partners. The Biden administration has an opportunity to bring stability and credibility back to the United States. From an international standpoint, that would be positive for business.

What about tax implications for businesses in 2021?

Brian: In 2009, Obama and Biden were entering into an administration, much like what we're seeing today, with a fragile economy. Knowing the new tax goals of the Biden administration, I would submit that our economy is just too fragile right now to increase tax rates to where the new administration would want them to be, at least in the short-term. It's almost the same exact playbook that we saw in 2009, maybe, now isn't the right time. I do think tax increases are coming, but it will be a lot slower than anticipated.

Jon: Lots of people talk about the concern about raising taxes and that is something that business owners worry about. However, another thing that's been very expensive for businesses is the escalating cost of healthcare. Although there's been lots of talk about trying to change healthcare, the fact is, it's gotten more and more expensive over time. It's become a very large expense for businesses. I'm hoping the new administration will tackle that, and bring us some new processes or abilities to control rising costs.

What will the economic recovery look like for businesses in 2021 and beyond?

Jon: Our economy is currently in a recovery phase and it has bounced back relatively quickly. However, from where we are today, getting to a full recovery is going to take longer. I subscribe to the theory of a swoosh, meaning that the economy dropped down due to the pandemic and then, started to bounce back. As we continue the swoosh model through 2021 and 2022, I believe we could continue to see a slow, gradual trend up, indicating that our recovery is uneven. Certain industries are not going to come back quickly or may never come back to the level they were before the current recession. 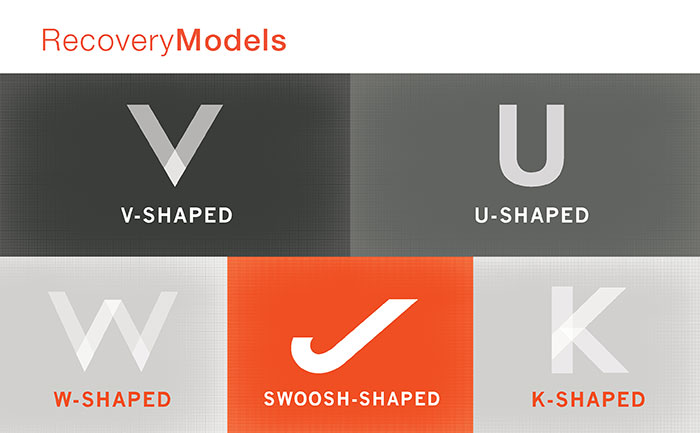 V-SHAPED
For a V-shaped recovery, the decline and growth continue at the same rate, meaning that the economy rebounds quickly to its baseline before the crisis. As the most optimistic pattern, it implies that the downturn did not cause any lasting damage to the economy.

U-SHAPED
During a U-Shaped recovery, the economy rebounds, but the damage at the bottom lingers for a longer period before eventually reaching the baseline level of growth.

W-SHAPED
In a W-shaped recession, also called a double-dip, the economy moves beyond a recession into a period of recovery before falling back down again into another recession. The initial recovery is sometimes known as a bear market rally.

Swoosh-Shaped
During a swoosh-shaped or “italicized V-shaped” recovery, the economy experiences a steep decline, then partial bounce, followed by a gradual, consistent recovery.

K-SHAPED
In this scenario, recovery is a combination of U- and Swoosh-shaped patterns. As the most realistic pattern, the economy divides into two tracks, differentiating two categories of sectors based on their speed of recovery: fast and slow.

What key indicators should businesses use to prepare for the future?

Brian: Our research team at Freeman Heyne Toma Financial Advisors does a great job of updating a weekly recession riskometer. We look at ten key indicators along with a social distancing dashboard, which tracks the number of people who are walking around, driving, using public transit, reserving tables at restaurants. At this time, all of those metrics have been down over the last four weeks. On the economic side, we look at manufacturing, same-store sales, and unemployment. All of those indicators are valuable when preparing for the economy’s future as a business owner.

Jon: Typically, percentages are the main focus in conversations around economic recovery, like, percentage of jobs recovered and GDP. I like to look at absolute numbers, like the number of Americans employed, a simple and defined number that can be used as a timestamped standard to indicate the movement of our economy.

A history of connecting and sharing expertise with business leaders

For the past twenty years and into our future, we’re committed to promoting your business’s longevity, building engaging partnerships with our customers by exchanging knowledge and expertise through video and podcast series, articles, and networking events throughout Northeast Ohio. Through times of prosperity and times of challenge, we are your business’s trusted financial partner. Let’s start working together.

If you click the "Continue" link below, you'll leave our site and enter another site which is hosted by a third party. This site may have different privacy and security policies than our site. So, for your protection, we encourage you to read and evaluate their privacy and security policies. Please understand that Westfield Bank has not verified the privacy or security of this site.

Is your home located in the state of Ohio? Please click "Yes" or "No".